This page includes HireWriters reviews of users as well as an official review by ContentHeat in which we carefully analyze and write out our experience.

SELECTING THE SKILL LEVEL I WANT

I selected an express writer, which was the highest and most expensive option, followed by skilled writer, general writer, and beginner writer. Respectively, the prices were roughly $2.50, $1.09, $0.91, and $0.61 per 100 words. They're a low budget writing service, except for the express writer. This is a regular price for which you can expect quality content from any content writing provider.

WHAT I ASKED AND THE PRICE I PAID

I asked for an informative list with a clear introduction that defines key concepts of what the article will address, and researched information of internet businesses that offer the service that I’m mentioning in the article.

I received the article on the third day after placing an order. This was within the timeframe that was promised to me.

As I began reading the article, I immediately noticed that the article is written by a non-native. I was able to tell that from the sentence structure and word choice. Here’s a sentence that I received:

Not only does this not closely address my topic, the sentence is basic, informal and uninventive. The entire sentence reads uncomfortably. The word ‘make’ is repeated twice, which can have been removed altogether.

A better sentence would have been: "Arousing the curiosity of customers is achieved easier when the website has a pleasant design, is easy to navigate, and contains informative content."

It is very common for writers to stretch out sentences to reach that wordcount faster, and while it is common, I find it unprofessional. Acceptable for low-quality content at a lower price, but not with your express writers.

The writer also misinterpreted the tone of the article. While I made it clear that I want an informative, borderline educational piece, I receive titles like:

It reads too commercial, like an obvious attempt to persuade the reader to buy content without letting him or her make up her own mind. Not only is my article not meant to be read as a copywritten text, the approach itself as a commercially-intented text is quite distasteful. On top of that, the writer misspelled creative, which is probably the first thing you've noticed.

Also, HireWriter’s word choice was quite repetitive. In the introduction, which was around 500 words, he used words like ‘who’, ‘can’, and ‘make’ repeatedly, sometimes even twice in a sentence. Although not a grammatical error, it does not read pleasantly.

BUT WHAT ABOUT THE WAY THEY DO RESEARCH?

For each entry in the top 10 list, I asked HireWriters to write: - the name of the service provider; - the year of their establishment; - where they are located; - How they offer this specific service (in this case ‘creative content’); - And the prices for this service (creative content); This is the format that I received for each entry: 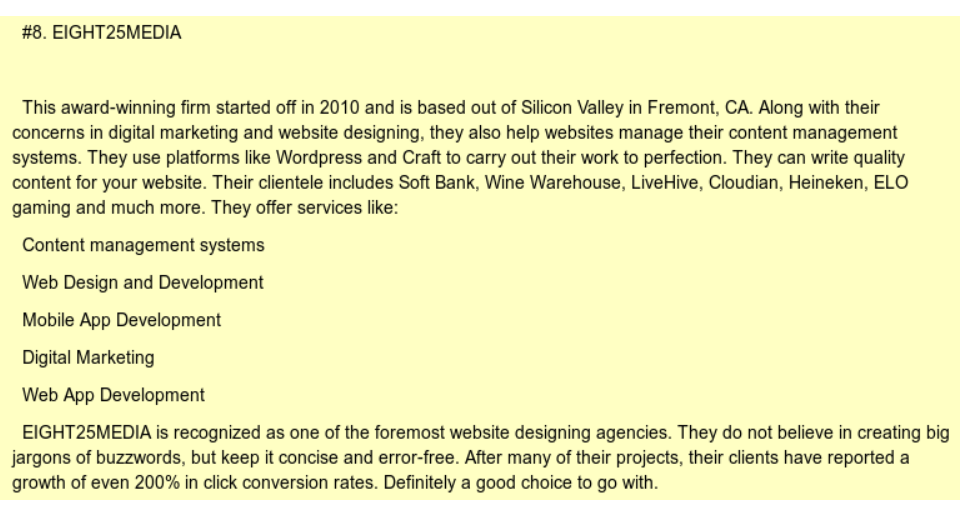 As you can tell, the latter two are missing. But also in general, HireWriters has written down businesses that do not offer the services I asked him to find. Researched done is inaccurate and incomplete.

YOU CAN FIRE YOUR WRITER AND RECEIVE ANOTHER ONE

HireWriters gave me the option to fire the writer that were assignmed to me. Since I won’t be able to use this piece of content, I have decided to go with that option: 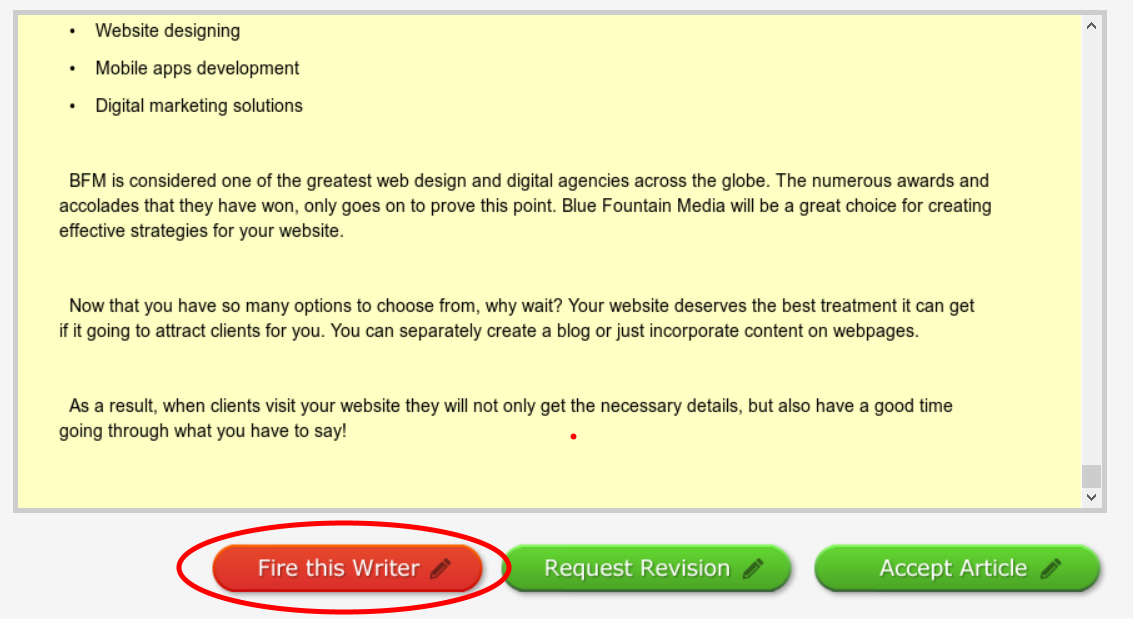 This occurred swiftly, and my article request was back online in their client area immediately, ready for another writer. Let’s hope it will take less than 3 days this time.

UPDATE ON THE NEXT DELIVERIES

The writer was asking for another extension, and I didn't reply to it. When I checked back on 27/04/2017, the article was marked as complete. So the dummy text was delivered to me as a completed work, and I didn't hear a single word from the writer about providing me the real content.  The platform also doesn't give me the option to rate the writer.

I mailed support on 27/04/2017, asking to reinstate the article so that the writer can finish it. Let's see what they write.

I did not get a message from the support team - they're too good for that. Instead I got an email from the writer on 28/04/2017, telling me this is not "dummy text" but a request for more time. Given that this was a long time ago, I asked the writer to deliver me the text. You're not going to believe it, but he replied by saying that he needed more time. Absolutely useless.

It's been 3 days, 1st of May right now, and I still haven't received anything from my writer after his or attempt at educating what the dummy text was for.

On the 2nd of May, he told me he needs another 2 days. At this point, HireWriters does not surprise me.

It is the 5th of May today, and I still haven't received my article. Hirewriters is bordering a scam operation at this point.

I received a refund in credit on the 9th of May, and I'll be using it to order the exact same article from another writer.

I would not recommend buying from HireWriters

Be the first to leave a review.

Your browser does not support images upload. Please choose a modern one